Originally that charm was enhanced by an even odder accompaniment, one even more suggestive of a landing of aliens: Fingask’s collection of almost life-sized statues, dotted at random among the topiary. Made at some point in the first half of the nineteenth century, carved from single pieces of granite, later covered in a cement wash, these naively realistic pieces of ‘folk art’ were described by Gavin Stamp as the nastiest things he’d ever seen. (A comment which, characteristically, was repeated to me with great glee by Fingask’s current owner, Andrew Threipland.) 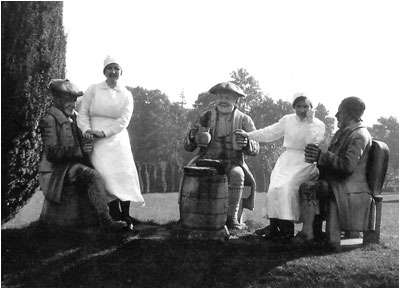 Many of the groups of statues have literary subjects. They commemorate scenes from the works of favourite Scottish authors of the day, including Burns (from Tam O’Shanter, Tam and his wife Kate, and the three jolly beggars), his disciple Alexander Wilson (Watty and Meg, from his song of that name) and Scott (from the Lay of the Last Minstrel).

Among them, though, is one exception, which by its complete inappropriateness is, in this bizarre assemblage, somehow completely appropriate: a single figure representing Pitt the Younger.

The main creator of the statues was apparently a Dundee man, Peter Anderson, though some of the later ones may have been by his son. There is no firm evidence for the date of their creation. 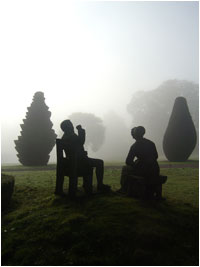 It is usually assumed to have been the 1840s but that seems doubtful. First, because the elder Anderson was by then indeed elderly (he died during that decade) and, second, because it is difficult to imagine why Pitt should be so honoured, 40 years after his death and when the Napoleonic Wars were becoming a distant memory. Sadly, though in his day Anderson had a considerable local reputation and even exhibited his work as far afield as Liverpool, little information seems to have survived about his career or about his work elsewhere. And I don’t know of any other actual pieces by him which have survived. If anyone reading this does, I should be delighted to hear from them.