You are here: Home > Gardens

A Secret in the Garden – Page 1 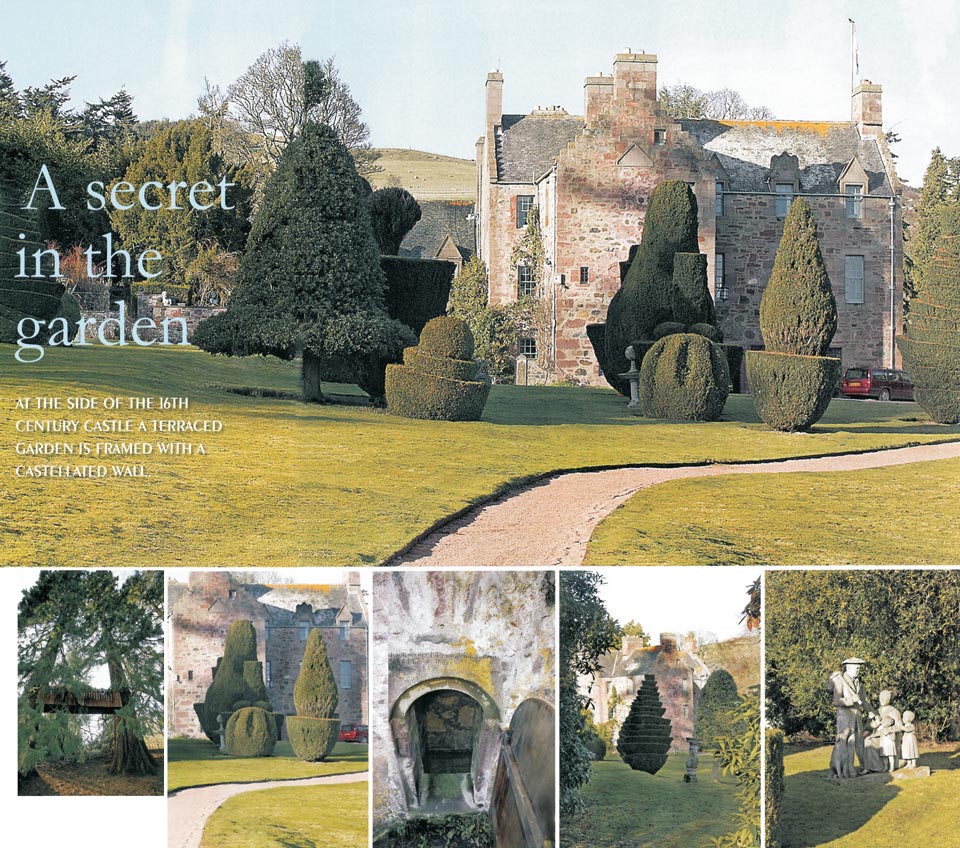 [Images – clockwise from main: An ancestor of the present owner first laid out the box yew and holly topiary garden at Fingask in the late 17th century; The stone statues are reputed to be the work of Dundee sculptor Peter Anderson around 1840; Different topiary shapes complement the angles of the castle; St Peter’s Well; The sculptured outline of the topiary makes an evocative backdrop for The Fingask Follies. Above: A tree house is slung between a pair of Wellingtonia.]

The spirals and domed shapes of the oversized topiary on the lawn in front of Fingask Castle in Perthshire exude a timeless quality that has triumphed over the whims of ownership and fashion since it was planted at the end of the 17th century. Stately and impassive, the topiary stands in a watchful position on the side of a hill overlooking The Carse of Gowrie and the Tay Valley, its curved shapes outlined darkly in the low winter sun.

The only concession to the 21st century is a child’s bicycle propped up against the side of a quirky double cone shape, while a liver and white springer spaniel puppy bounces in and out , belongs to Peter, 7 year old son of Andrew and Helen Threipland; Andrew’s family have owned the castle on and off for 400 years – Maud is a recent acquisition.

Emerging from the castle door, which is decorated with a holly wreath, Andrew explains some of the history.

‘Records indicate that the box, yew and holly were laid out in the late 17th century by an ancestor, Sir Patrick Threipland, and his wife Eupheme Conqueror. The exact origins are long forgotten, although one section of shapes is reputed to represent the crown jewels.’ The work, he adds, was continued by generations of different topiarists, a trend illustrated by the varying styles of topiary and choice of shrubs. The yew is dark green and golden, while the varieties of holly are both green and variegated. Years of battling the winds have meant that some of the shapes tilt alarmingly, especially the shallow rooted holly.