Fingask's individuality-cum-idiosyncracy, incidentally, wasn't restricted to its garden – and isn't restricted to its past. In his Day Book, Peter Chalmers, its long serving nineteenth-century butler, recorded uproarious winter days spent singing, dancing, drinking, curling or shooting on the hills with his employer, the same Sir Peter who was responsible for the statues. 'No sign of the green baize door here!' as Andrew Threipland says. Such days seem only occasionally to have been interrupted by actual work, for example the grudging comment that he had 'Spent the day roughing the silver'. Those shoots Chalmers and Sir Peter went on weren't, of course, driven shoots: they were just two men, their guns and their dogs, getting what they could from a long day on the hills. So, on 12 August 1852 Chalmers records that 'Sir P and I went up the moor to the grouse after breakfast and killed 4 brace of grouse and 4½ brace of black game.' – Time Longville's Snippets.
At one point Chalmers records buying a new bag for his bagpipes. The Kinfauns entry makes it easy to imagine what caused the death of his old one. Indeed, such was the 'family' feeling in that unpretentious household that when in 1851 Sir Peter had his portrait painted so did his butler, the housekeeper, the ladies' maid, the coachman and even the coachman's horse.

25 February: Jane Oswald and Mary Gray got their likeness taken too by Mr McDonald. He finished them all tonight.

Chalmers's portrait, at least still survives. And both master and man equally appreciated the 'aqua', which the day book records 'Mr Stewart' regularly brought down from his illicit still in the hills. 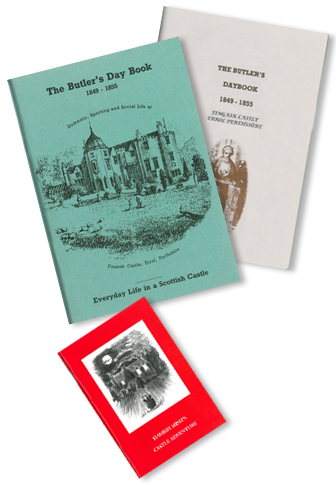